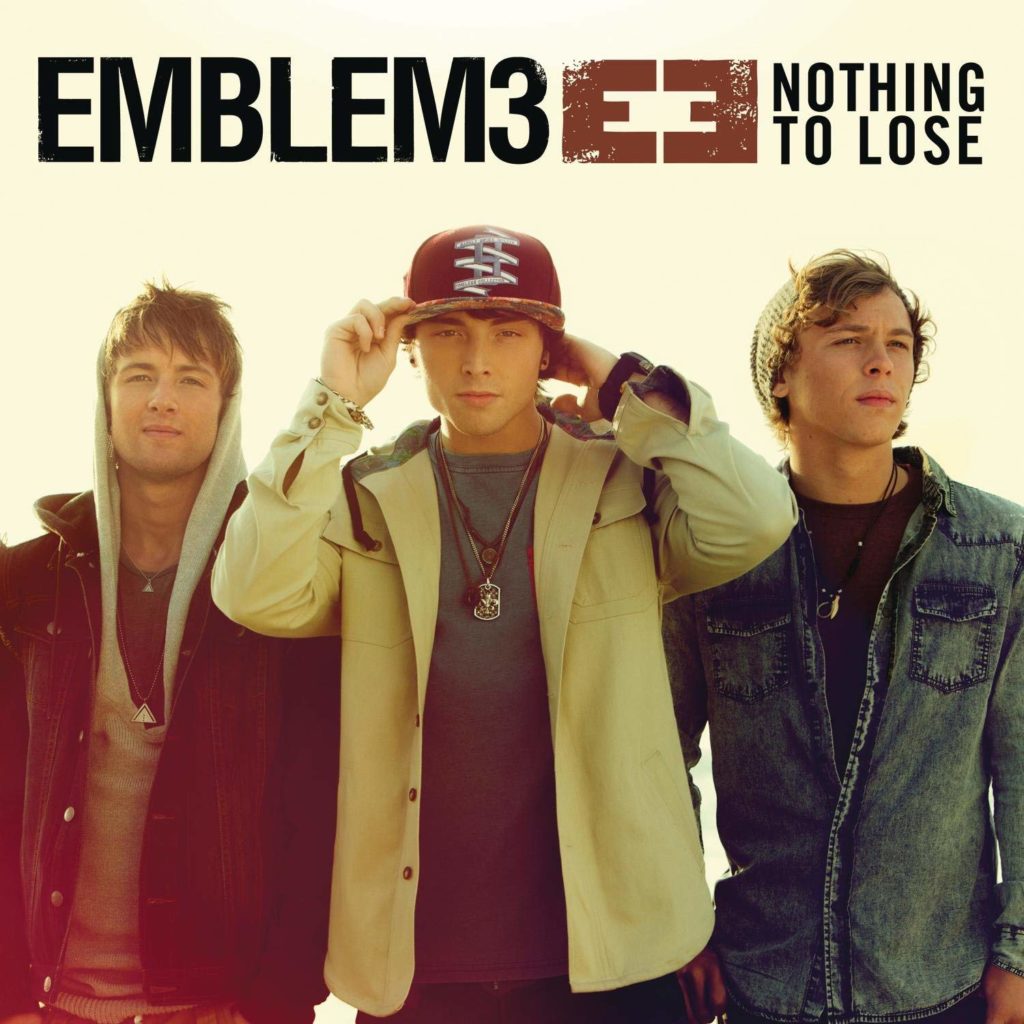 Pop trio Emblem3 may truly have Nothing to Lose but do they ‘gain enough’ to become commercially successful on their debut album?

Just as the album title suggests, former X Factor trio Emblem3 have nothing to lose. And I do mean nada. Why? Well, the former contestants from the show have been unsuccessful in establishing a commercial presence. To their credit, Emblem3 seem to have more ‘commercial’ firepower compared to other contestants.  That said, that doesn’t make Nothing to Lose as a surefire thing critically or commercially.  From my perspective, the album has its moments that should appeal to the teen audience who view them as the image of the modern day heartthrob (earrings, tattoos, surfer look, etc.), while also possessing the bubblegum, pop-rap to make skeptics roll their eyes.  In other words, it’s mediocre.

“Just For One Day”

“Just For One Day” establishes a breezy beach pop sound suited for Cali, opening with a rap. Rapping recurs later on, but don’t call Emblem3 the next Eminem…  The lyrics are pretty easygoing and simple, perfect for the youthful crowd, including “With the top down, hands up, wind your hair” or “Baby this could be a dream / the kind to make you smile at night / and I’m the kind of guy to make the dream real life.” The chorus is the best part both instrumentally and lyrically:

Decent opener all in all, nothing spectacular. “Spaghetti” is likely the ‘deal breaker’ for the anti-schmaltzy, anti-teen pop crowd. “Let’s ditch the party, ignore everybody / And we’ll make spaghetti and it’d be all ready…” OK… It’s silly, made sillier with the constantly reiterated “Aye ee aye everything’s gonna be alright,” but the production is solid.  Jack Antonoff  and Savan Kotecha are both notable songwriters.  On “XO,” big drums signal a modern pop idiom and ultimately, continued consistency where production is concerned.  Like “Spaghetti” it’s ok without being breathtaking.  A rap during the bridge is ‘cornball central’, but might please tweens:

“Click click, like a cupid on rampage / Bam, bam blew a hole through my rib cage / Pinky ring, middle finger down with the thumb / A simple way to let you know that you’re my number one…”

The set’s standout is single “Chloe (You’re The One I Want).” The sound is bubbly, infectious, and anthemic, particularly on the chorus:

“Chloe, I know you sister turns everyone on / But oh baby I have no doubt you’re the one that I want…”

This is a relatable sentiment to everyone even if primarily targeted towards the middle school or high school demographic.  The two pop-rap verses are bearable and pretty effective, while the bridge is corny yet honest, delivering a message to the “Chloe’s” of the world being “diamond(s) in the rough”.  Annoying? Yep, but irresistibly so.

“Girl Next Door” is very tongue-n-cheek, which doesn’t make it for everybody.  The stomping pop beat as well as a catchy, feel-good chorus are among pros. Cons? Aside from corniness, the production grows a bit too big dynamically, particularly towards the end.  “Nothing To Lose” atones, with exceptional overall production and most specifically its vocal production.  There’s a little swagger here, particularly the Taylor Swift alluding rhyme: “If you give me a chance, I can promise you this / You won’t be singing breakup songs like that Taylor chick.” That would’ve been enough to make this a standout itself.

The momentum fades thanks to two odes to Los Angeles, which are side by side.  I have no clue why they opted for this, but whatever.  “I Love LA” would’ve been sufficient. Straightforward and simple, the shout out is what it is.  “Sunset Blvd” continues the adoration, in which the boys urge, “Let’s take a trip to Sunset Boulevard in the city of stars / The city of blinding lights and starry eyes / I said now welcome to the city of angels, whoa / City of angels, whoa.”  “Sunset Blvd” has good intentions, but it’s gimmicky and ‘all over the place.’ Drew Chadwick does make you shake your head on memorable rap “I said I love my women like I love my juice naked / All natural, no preservatives or fakeness / I like my ladies like my Bradys in bunches…” #CRINGE.

By the final three cuts, much of the momentum established by “Just For One Day,” “Chloe”, and “Nothing To Lose” has long faded.  “3000 Miles” gives the band a pop ballad, which is a welcome contrast to the pop-rap cuts.  It’s not quite ‘rousing’ per se, but does give the band a different look. “Teenage Kings” is a low point, with the band basically elevating themselves on a pedestal because of their fame. Lame. “One Day” dabbles in reggae, which many pop and R&B artists really should avoid.  As with much of Nothing To Lose, the chorus stands tall.  Aside from the topical vocal emulations, I’m skeptical that the message is too weighty for guys living up their youthfulness. Going from being teenage kings to desiring world peace are two starkly different extremes.

Ultimately, Nothing To Lose (as mentioned previously) is mediocre at best.  The productions always stand out, but the songwriting is generally less impressive.  Emblem3 definitely have potential, much like they did during their run on X-Factor.  Even so, don’t call this album a triumph.  Moments, but lacks consistency.