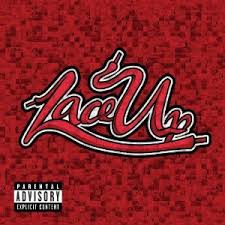 Not being a ‘smart aleck,’ but every time that I hear the statement that “Bad Boy don’t 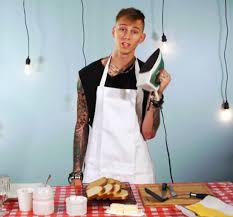 stop,” I chuckle a little. No disrespect to Diddy as I am a fan who actually purchased his most recent albums Press Play as well as Diddy-Dirty Money’s Last Train To Paris (quite underrated), but Bad Boy since its heyday has been incredibly unstable.  The label sparks a new run and then falls off once again.  I hope for talented newbie MGK and also French Montana that the label has some more ‘traction’ this time. MGK’s debut album Lace Up, like preceding EP Half Naked & Almost Famous is released via Bad Boy but distributed via

Interscope, quite a stable label.

MGK (Machine Gun Kelly) holds his own with the best in a crop of new MCs, race regardless.  MGK’s agile, wordy flow epitomizes midwest rap, something that has been missing from rap.  Let’s face it, midwest rap has generally gotten less notoriety or attention. Bone Thug N Harmony had their peak, but don’t perform nearly as well commercially as they once did.  Like MGK, Bone Thug N Harmony hail from Cleveland, OH.

Lace Up turns out to be a solid album.  There are more than enough start studded guest

spots (Bun B, Lil Jon, Waka Flocka Flame and DMX among them) and the production is generally exceptional throughout (Drumma Boy, J.U.S.T.I.C.E. League, Alex Da Kid, and Boi-1da amongst producers).  There are no overt misses, even when some songs are stronger than others.  Despite the guests artists, MGK is never over shone, which is the mark of a talented artist.  The  standard edition of the effort yields thirteen cuts, including the popular “Wild Boy” while the Deluxe yields 16 (and the iTunes version yields 17).

“Save Me” initiates Lace Up exceptionally, featuring M. Shadows and Synyster Gates (of Avenged Sevenfold). Produced in rock/rap styled production (Brinton “Woodro Skillson” Ewart & Rami “Rami Beatz” Eadeh), it proves to be perfect fodder for MGK’s rhymes of his struggles to ‘make it.’  MGK manages to score a couple of memorable rhymes: “…And f**k this throne, ain’t no kings, no pretty princess, ain’t no queen/No fairytale endings on the Eastside, just these broken homes and those screams/broken bones underneath these jeans, broken bricks cover up y streets…” The rock-savvy sung hook doesn’t materialize until the end (performed by M. Shadows), but caps off an excellently conceived opener.

“What I Do” features Bun B and Dubo. Produced by SykSense and Irvin “Swirv” Whitlow, the sound is clearly slated in the overt hip-hop idiom. Dubo and MGK handle the aggressive, though memorable hook: “Uh, I see ‘em try but they can’t do what I do, what I do/Yeah and I’m gon’ die before the day that I lose, I lose/B**ch I am the man muf**ka, the man muf**ka….” Bun B delivers a capable first verse but MGK concedes no star power on his agile second verse, representing for Cleveland by all means.

“Wild Boy” is easily MGK’s most established cut – his staple by all means.  Produced by GB Hitz and Southside and featuring one of today’s least serious rappers in Waka Flocka Flame, “Wild Boy” continues to captivate. “Yeah b**ch, yeah b**ch, call me Steve-O/I’m a wild boy, f**k and eighth I need o’s…” MGK boasts on one of the more memorable rap hooks of 2011 (when the cut materialized).  MGK is as potent on his verses, delivering a couple of clever lines where it be “I’m an East side Cleveland wild boy…we got baseball bats like the Indian and my team pop off like cowboys…” or “Lose control like Missy [Elliott], but I’m a bad boy cause I’m with Diddy b**ch!” Flocka delivers the second verse in his signature loud, scream-laden style, but MGK outperforms him, if for nothing else than signature line “Cobain’s back, got these crazy white boys yellin’ Cobain’s back…” “Wild Boy” should prove to be MGK’s classic.

“Lace Up” is easily a standout, though it would standout for nothing more than being

MGK’s signature line.  Produced by Drumma Boy and featuring a long-lost Lil Jon, “Lace Up” turns out to be another successful, solid, and consistent cut.  The production is dark, but in a bright sort of way that only Drumma Boy can master.  The drum programming buttresses, but the 808 isn’t over-invested while the clapping snares are perfect.  Lil Jon covers the hook (“Where my eastside muthaf**kas (I’m laced up)/where my westside muthaf**kas (I’m laced up)…”) as well as getting his own verse to assert himself, much like his crunk work of the past.

“All We Have” features Anna Yvette performing the chorus (“All we have right now…Go hard or go Home”) and serving as co-producer alongside Frequency. The cut doesn’t possess the spark of the very best, but also doesn’t cede much momentum.  MGK remains pointed, even though the production has a slightly more subdued quality.

“See My Tears” is the second cut to receive reprisal, from the Half Naked & Almost Famous EP released earlier this year (5-song, 17 minutes). “See My Tears” didn’t really allure me back then, but as I relive and rehear the cut, it stands out.  Produced by standouts J.U.S.T.I.C.E. League, the cut samples Armin Van Buuren’s “Rain” of which Cathy Burton provides sung vocals.  The chorus is a combination of sample and MGK’s added lyrics (“You can’t see my tears in the rain…Underneath it all we just the same, same same…”)  J.U.S.T.I.C.E. League add superb drum programming, intact with clapping snares and pummeling kick.  The great consistency continues.

“D3MONS” is the superstar collaboration fans have been waiting for.  Setting up a second collaboration with DMX (the two met earlier for “I Don’t Dance” from DMX’s Undisputed), “D3MONS” is ‘twisted’ representing the effects and affects of various ‘demons.’ MGK alludes to drugs (“…My skin is bluish, voices in my head saying/‘Don’t be stupid all you have is in that bag you better use it’…) and confirms how bad the ‘demons’ are messing him over on the pointed hook:

Clever is the way the MGK and DMX split the verses, with MGK taking the first half of the first verse and DMX closing it out while the second verse is visa versa. If any cut makes MGK compare to another brash caucasian MC (Eminem), the twisted, pointed rhymes of “D3MONS” does.

“Edge of Destruction” is as solid as most of Lace Up, though it misses the ‘first tier.’ Featuring Tech N9ne and Twista and produced by Michael ‘Silent Mike’ Brascom and Irvin ‘Swirv’ Whitlow, “Edge’ yields another solid, enjoyable number. MGK wins the MC battles, a testament to his skill.  “Runnin’” is just over half of the duration of “Edge of Destruction” but packs a stronger punch.  Planet VI does a fine job of delivering the chorus with smooth and clear vocals.   Boi-1da’s production is light, but the non-flashy nature surprisingly bodes well here.

“Invincible” featuring/co-written by Ester Dean finally finds a home.  Produced by Alex Da Kid, the cut is characterized by big drums and bright synths accentuating the hook.  Ester Dean’s vocals are lovely and MGK continues to deliver agile, quick-witted rhymes. Not the ‘elite’ of all, “Invincible” still shines quite brightly.

“On My Way,” produced by Jon “JRB” Bishop and Irvin “Swirv” Whitlow, gives 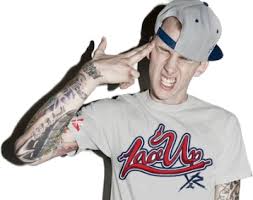 MGK a reminiscent moment.  Here, the MC discusses his life candidly, even going as far to include a spoken (non-rapped) interlude between the two verses.  While the interlude may be the high-point, MGK also delivers some credible rhymes on the verses. On verse 1, MGK states “…ain’t it ironic before I was 21 I put my future on the table and I won…Man I do it for the 5-pack of Hanes wife-beaters that I wore like everyday to show my brand new ink…”.  On the final verse, MGK strings a bunch of film titles quite creatively into his life story: “Okay I heard they want the classics, my life’s a movie like the Truman show w/o the cameras/they look at us like we a couple Boyz N Da Hood…I was Superbad in the class I just Dazed Off…” Another clever, noteworthy showing. 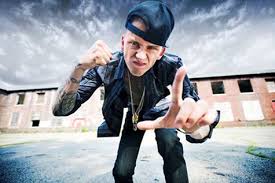 “End of the Road” featuring blackbear ends the standard edition of the effort.  Blackbear covers the first portion of the hook (“So take my name, remember this face, keep the change, and have a nice day/and live for the moment, not by the past, homie live each day like it’s your last) while MGK closes.  Continuing MGK’s testimony, “End Of The Road” is an appropriate closer without revolutionizing Laced Up, an album that has more than proven itself by this point.

The Deluxe version features “Half Naked & Almost Famous” (a reprisal from the EP of the same name), “Hold On (Shut Up)” (featuring Young Jeezy), and “Warning Shot” (a reprisal as well, featuring Cassie).  As stated earlier, the iTunes edition features “La La La (The Floating Song),” a 17th cut.  The Young Jeezy feature is the best bonus cut, placing MGK and Jeezy atop a southern rap production well executed by JPdidthis1. 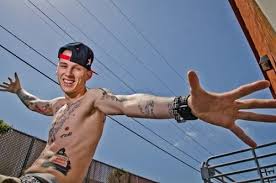 As stated previously and inferable via the aforementioned critique, Lace Up joins a list of exceptional rap efforts from 2012.  There are no overt misses worthy mentioning, even if a cut or two could’ve been shaved without affecting the overall effect of the effort.  I found myself more impressed with the full-length debut than the EP, which is a positive takeaway for Cleveland’s rising star.